Thanks so much for checking out my second installment of Run with Emily as I work toward 10 weeks to the 4 miler.  This week I fought for truth, justice and the American way…ok maybe I just ran but I did learn some super lessons!

It Was Time to Take Off The Training Wheels!  Apparently the treadmill was my training wheels.  I received some words of wisdom from a runner that the treadmill and the real road are totally different animals!  He wasn’t kidding.  I feel a bit like I’m starting back at square one and I can’t keep up the pace I can on the treadmill.  Also, it is more painful since I’m using different muscles.  I felt like my legs had been beat up after that first run but it has gotten better since then! 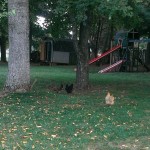 Meeting New Friends!  My first real run outdoors in my training was right around my neighborhood and guess what, I met some local chicken friends!  I never knew I had some fine feathered neighbors. On my first run I also came across a ton of people I hardly ever see or talk to. I’m a social butterfly so it was a nice excuse to catch up with folks (even though I should have been running more).

Feeling Hot, Hot, Hot! Why does it have to be a million degrees out everyday this summer? Not only is it harder to run outdoors but I also feel like a spigot of sweat is coming out of me. At least at the gym I can rinse off before going back to work but I’m afraid if I train outside during the work day I’ll come back smelling like hell! Any words of wisdom would help.  I can’t run early in the morning at home and I feel guilty later in the day because I need to take care of the family.  Should a marine core shower come into the mix? 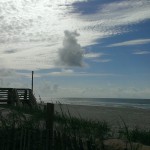 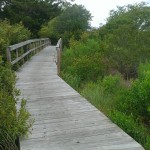 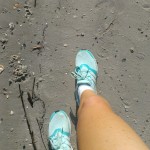 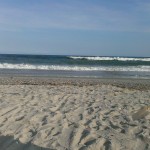 Life’s a Beach and I wish I could run on it every single day! I’ve been running at the beach while on vacation (I know, dedication right?) and it has given me a chance to train on different surfaces. These are my experiences:

Be Prepared! I forgot to make sure to take this Scout’s motto to heart before I headed out on vacation.  I assumed that I would find all the materials I needed to run comfortably while shopping at the beach.  Boy was I wrong!  Where in the world do you find the arm velcro strap for a phone?  I looked in several big box stores and couldn’t find one.  So I finally settled on a butt pack from Walmart.  It does fit two small water bottles in it and it keeps the phone from popping out.  Also, who can argue? It was only $6!! However, tucking the phone into the butt pack while it was playing music caused the phone signal to go in and out cutting off the music. I need to get an MP3 player so I’m not using my data plan to play tunes.  Any advice on the best music mix to run to?  I really like the distraction of music so I don’t hear myself gasping for air instead! 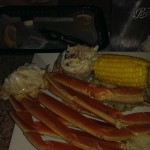 Excuse to Eat a LOT on Vacation!  I’m sure I haven’t worked off as much I’ve eaten but at least I don’t feel as guilty.  I indulged in a huge crab feast!! I’m still waiting on the supermodel body to show up as a runner.  I don’t think it’s in the cards for me but at least I look a little more toned!

If you’re on the fence on whether or not to train for the 4 miler run or walk or the 10 miler, it’s not to late to train!  In fact, you can get a jump start on registration by clicking here.  Check back in next week for another installment of Run with Emily!