The clock is ticking and there’s less than 40 days to the Genworth Virginia 10 miler!  This week I discovered a beautiful local running site, I got to run with the real deal…actual athletes and I learned I may be overanalyzing this whole running experience a little or maybe a lot! Here’s a bit about the sights, sounds and lessons I learned this week: 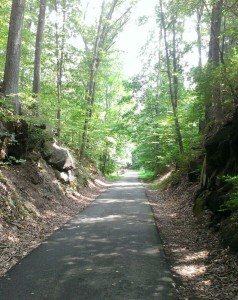 A River Runs Through it…ok really a creek.  The Blackwater Creek Trail is GORGEOUS!!  This week I’ve been starting my runs at the Awareness Garden entrance off of Langhorne Road in Lynchburg.  Thank God the path is mostly covered in trees making it a much cooler run.  An added plus is that the trail is labeled every quarter of a mile!!!  This really helps me because I don’t have a pedometer yet.  You don’t see the creek too much but you can often hear it babbling in the distance.  This trail is a great destination in general for cyclists and folks with kids or animals too.  They even have dog bowls for panting pooches by the restrooms.  By the way, the restroom to the right is for the women and the left is the men’s room.  I spotted the urinal before I figured it out!!

Running with Real Athletes…and Distractions!  I came across a couple of regular runners at the Blackwater Creek trail and they offered for me to run with them.  I 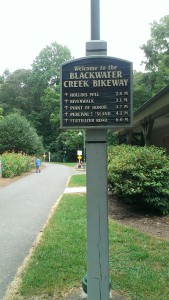 had my reservations since I knew I had to be much slower than them but I gave it the old college try and you know what?!  I did pretty well!  I did make them slow down for a couple minutes around mile two but I had a blast!!  It was so nice to focus on chatting (really they chatted with me and I tried to talk but just panted) and they want me to run with them more often!  The best part!  I think my time was light years better than normal since they inspired me to run harder!

No Pain No Gain!  After my run with the real athletes I felt great, until that night!  I kept waking up feeling sore throughout the night.  Even my abs hurt! One of the runners suggested I try yoga to focus on stretching.  Probably a good idea since I can’t even touch my toes.

It’s Not Rocket Science. Coach and course director of the Genworth VA 10 Miler Danny Boyers says running is really about what feels right.  There are some running form suggestions though.  Do what your mother always told you to, stand up straight!  Danny also suggests keeping your body in a straight line and relaxing your head and shoulders. Also, chest out, it helps with breathing. Yeah, we’re technically fancy!

Thirsty Work! How much water do you actually need for a run?  I talked to Danny about this as well. He said one of the best ways to figure this out is to weigh yourself before a run and after.  Then you know how much you’re sweating out.  So you have to drink whatever you’re supposed to everyday and then whatever you’ve lost. 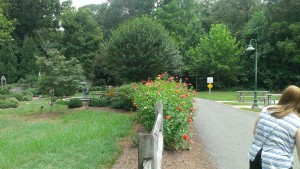 Stay Motivated!  I had a Tortoise and the Hare moment recently that motivated me and embarrassed me at the same time!  I was running down the Blackwater Creek trail and a woman pushing twins in a stroller blew past me!  I am hoping deep down they aren’t her kids and she’s just the sitter but I couldn’t ask because I couldn’t catch up!!  Talk about ego killer!!  I’m barely carrying my sorry butt and she’s got hers and the kids too!  I now look at her as inspiration!

If you want to be like me and try to run faster than Wonder Woman pushing kids in a stroller, why not train for the 4 miler or the 10 miler!  To find out more information about this year’s Genworth Virginia 10 miler click here!