We’re about halfway there to The Genworth Virginia 10 Miler and boy am I starting to feel it!  This week was really a wake-up call to my body! I learned that there is more to running than speed and endurance. Fortunately I went straight to the experts at Rehab Associates for advice.  They first gave me something called a functional exam.  This was quite specific and they had me do everything from squats to standing on one leg with my eyes closed.  I felt like an idiot because I could barely balance!  Then they recorded video of me running on a treadmill.  This is what I learned about my running form and general issues that a lot of runners deal with:

Tight and Gumbyish! Yes one of the physical therapists actually said I was tight and Gumbyish (from the Gumby cartoon!) at the same time.  I learned this during the functional exam.  What this means is something more serious though.  My limited range of motion is causing some of my aches and pains that could turn into something more serious down the road.  Here are some of the specifics: 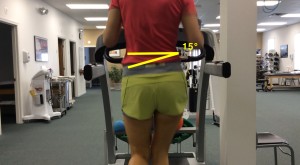 Hips Don’t Lie! Apparently shaking your bon bon too much during running is a sign your hips are weak!  I used to lift weights and never thought about hip strength but building your core and hips can help.  Hip weakness is a common problem with runners and if you have knee pain it might actually be your hip causing it.  Fortunately there are exercises to help strengthen your hips like rotational lunges that are targeting the same muscles you use when you’re running! Since my hips were dropping to a point of 15 degrees during running (should be around 7-8 degrees) I will be performing these exercises to strengthen my hips.  If you want to learn more about specific hip strengthening for runners, Rehab Associates is doing a talk and demonstration at Riverside Runners in Lynchburg on Thursday, August 27th at 6 pm.

Achy Breaky Ankles. In the beginning of my training for the 4 miler, my arches were killing me.  So I bought some inserts for my shoes and it helped but recently my ankles have been aching! Well apparently my feet are to blame because I have almost no shock absorption! It’s kind of like slamming on the gas when your car is in neutral, it’s got no-where to go. So because of this, my knee, hips and low back and other parts of the foot have to work harder to absorb the shock and I feel it in all those places too.  I now have to do stretches to stretch out the heel and the calf. 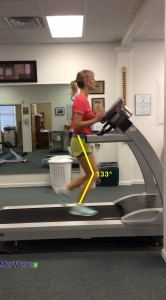 The Rhythm of Running. Apparently I need to increase my cadence. Which means I’m not taking enough steps every minute which in turn means I’m overstriding.  Now that doesn’t mean you need to Yabba Dabba Doo like Fred Flintstone and let your feet be a blur.  However, runners should be taking 170-180 (180 is the sweet spot) steps a minute.  I was at 160 in my running video.  But how in the world are you supposed to know your cadence every minute?!  Well technology to the rescue! I downloaded a metronome app to my phone.  The noise of the beat drives me a little crazy but it helps to set a pace!

Every “Body” Is Made Different! Since I’ve begun running I’ve gotten a lot of advice from a lot of different people, however I’ve learned that what may work for one person may not be right for the next.   Physical therapist Dr. Jacqui Gooden says you have to address your faults on an individual basis.  And if you’re hurting, it’s best to figure out the issue early.  If you’re having problems that haven’t been resolved in two weeks you may need some rehab!

No Pain No Gain!  However, Jacqui doesn’t want you to wimp out!  She said that after a good workout you should have muscle soreness and if you don’t, the workout wasn’t challenging enough!

I Don’t Look So Hot in Slow Mo!  This is my biggest lesson of the week!   No one should see their own behind while running!  Kidding aside though, I’ve learned a lot and there really is a ton to know.  From now on I’ll skip the self-diagnosing my physical problems and leave it to the experts!

If you would like to run in normal mo with me, why not train for the 10 miler or the 4 miler run/walk?  To sign up or find out more information just click here.